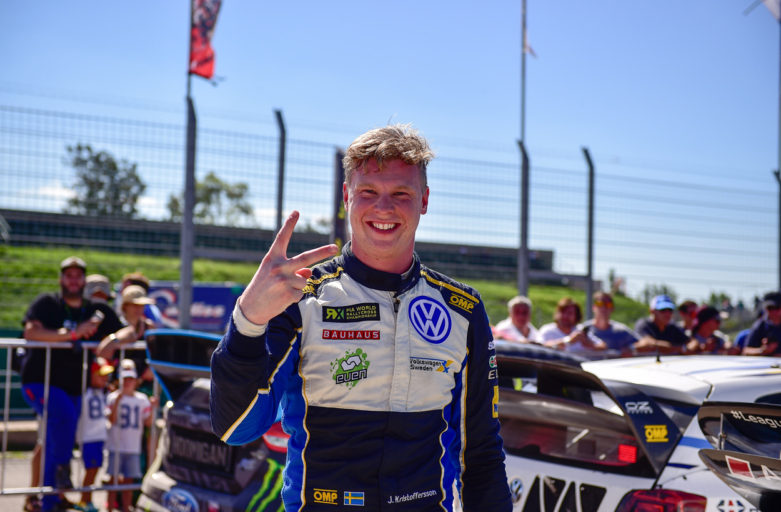 EVEN Management’s Swedish rallycross driver Johan Kristoffersson secured second place in the FIA World Rallycross Driver’s Championship when he finished second at the final round in Argentina (November 27).

A brilliant drive by Johanin the semi-final and final aboard his Volkswagen Polo RX, secured the experienced driver second overall in the Drivers’ Championship after a year-long battle.

He was delighted to have improved on his third place in the World RX from 2015 year by finishing second in Rosario. “After the semi-finals I knew I had to be first or second in the final to be second in the Championship. The start went well, and we managed to avoid any contact. I have to admit I was driving a little bit like a grandma, avoiding punctures and no drifting or anything, but it’s such a great feeling to be second in the race and the Championship,” said Johan. “At the beginning of the weekend it didn’t feel like we were where we wanted to be, but everyone worked really hard and we finished one place better than last season in the points. I have to say it’s very tight, for there to be only one point between second and fourth in the Championship after 12 events is just amazing. Big thanks to the team and our partners!”

Johan’s team Volkswagen RX Sweden also secured a podium in the Teams’ Championship after the great efforts by Johan and his team-mate Anton Marklund.

Team Principal Michael Schneider was delighted for the whole Volkswagen RX Sweden team that the weekend’s target had been reached. “This is really great. Johan and Anton both performed so well this weekend. The way Johan drove in both the semi-finals and final was fantastic, it’s incredible,” he said. “We had the chance to be second in the Drivers’ Championship and third in the Teams’ Championship coming here and we achieved it. I have to thank the team, sponsors, partners and team owner Jan Marklund. Everyone has worked so hard all season long and everyone deserves this.”