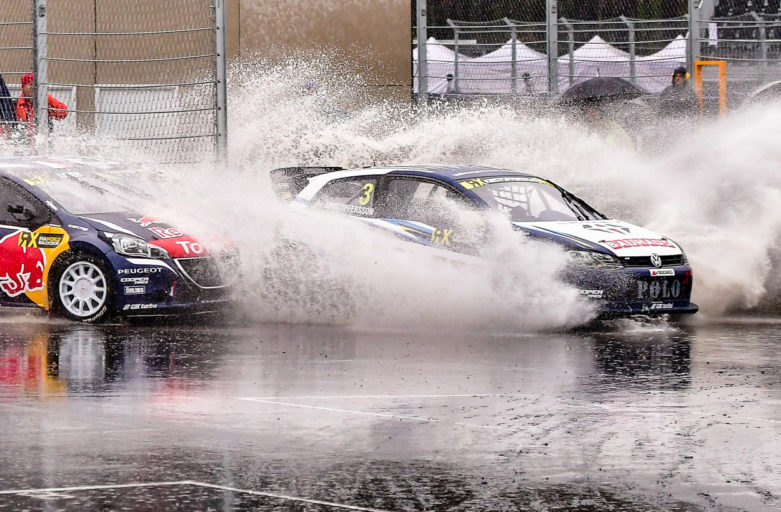 Multi-discipline motorsport star Johan Kristoffersson climbed to second overall in the FIA World Rallycross Championship classification by qualifying top at the Intermediate Classification and finishing fifth in the final at the Latvian round of World RX in Riga (October 2).

Proving the pace of the Volkswagen Polo RX Supercar in both wet and dry conditions, Kristoffersson set the fastest time in Q2 on Saturday afternoon before claiming top spot in Q3, in torrential rain. Incredibly, the Swede’s time was nearly six seconds faster than any other driver. Starting on pole position for semi-final one, Kristoffersson only just missed out on victory to nine-time World Rally Champion Sebastien Loeb, before finishing fifth in the final to climb to second in the World RX Drivers’ Championship table.

With two rounds of the FIA World Rallycross Championship remaining in Germany and Argentina, Kristoffersson is just 27 points shy of the championship lead, with a maximum of 60 points available from the final two rounds. “I was able do one very quick run in the dry and one in the wet this weekend, so that was good, and to be top after the qualifying races and move to P2 in the championship is great. I have to thank the whole team because now we are scoring a lot of points at every race. We just have to keep pushing, to continue to try and fight for this championship,” said the EVEN Management athlete. “We missed a bit of pace in the semi-final and final, so it has not been an easy day for sure. We have made a lot of progress in the last few events and I’m looking forward to Germany in two weeks.”

Team Principal Michael Schneider is pleased with the progress made in both wet and dry conditions, and says the team will do all it can to help Kristoffersson fight for the World RX Drivers’ Championship title. “Johan had a very good weekend. To be top qualifier takes a huge effort from the team and driver, and it proves again that we have the pace to run at the front,” said Schneider. “It’s great that Johan has climbed to second in the championship, we will work hard to do everything we can to finish in the best possible place after the last round in Argentina. Nothing is over until after the final round.”

The next round of World RX takes place in two weeks’ time at the Estering in Germany (October 15 – 16).