Victory for unbeatable Kristoffersson in France 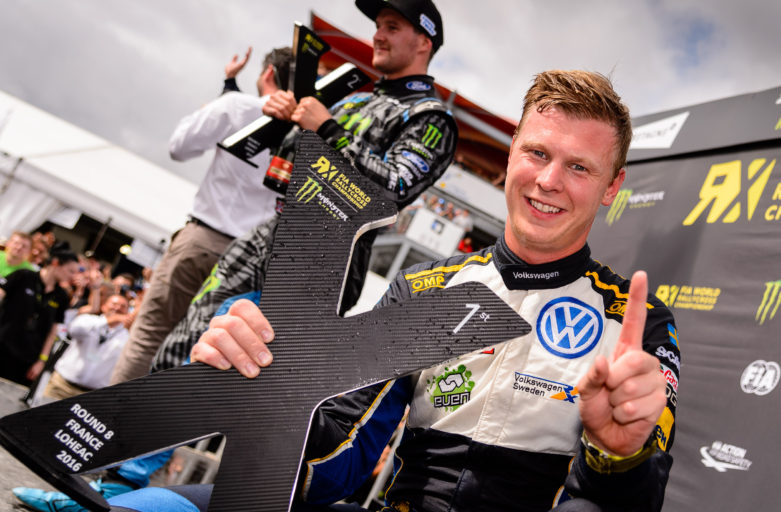 Swedish star Johan Kristoffersson won the eighth round of the FIA World Rallycross Championship in front of a sell-out crowd at Lohéac in France, driving a Volkswagen Polo RX Supercar.

Kristoffersson dominated the second day of competition at the famous Lohéac circuit, setting the fastest time in Q3 and Q4 in difficult changing weather conditions before leading both the semi-final and final from start to finish to score an empathic first victory of the season.

The result comes following Johan and the team’s first podium of the year in Canada a month ago, and moves Johan into third in the World RX Drivers’ championship.

“We have been in a position to win since the first race of the season, and then in Canada four weeks ago were able to finish on the podium. Yesterday we had quite a good speed but didn’t really put everything together, but today it has just been amazing,” said Johan. “The Volkswagen Polo RX and my driving style suit the wet conditions well, and to be fastest in Q3 and Q4 was fantastic. The semi-final was also good, I just got my head down. In the final I made a good start then at turn three I saw Petter [Solberg] in the wrong direction in my mirror. From there I was just pushing, I heard on the radio I was clear behind so I was just trying to stay away from the kerbs and push hard, but not too hard. I have to say a really big thanks to the team, we made some positive changes to the car overnight and it was a pleasure to drive. This is just fantastic!”

Volkswagen RX Sweden Team Principal Michael Schneider was delighted with the victory, for the whole team. “It has been just amazing today. Johan was flying; he dominated Q3 and Q4 as well as the semi-final and the final from the start to the finish line! To win here in Lohéac is really special – it is an amazing crowd,” said Schneider. “We have been waiting for a victory since the first race of the year. The whole team has worked so hard all through the season and each one of them really deserves this win.”

The next round of the FIA World Rallycross Championship takes place in just two weeks time at the Circuit de Barcelona Catalunya (September 17 – 18), where Kristoffersson finished on the podium last season.